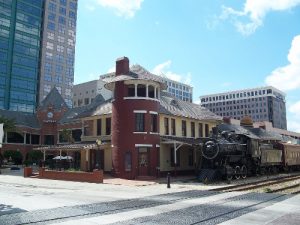 During the building frenzy in 2005, scarcely a week passed without another major condominium project being announced for once-sleepy downtown Orlando. Sometimes, those same developments would announce quick sellouts as buyers swooped in to drop down deposits.

Now, reality has taken hold and the pace has slowed. Yet, despite a softening market, more than 30 projects are either planned, under construction or recently finished. That means roughly 7,000 condominium units are in the pipeline, along with more than 1 million square feet of office space.

And on the fringes of downtown, huge expansions at Florida Hospital and Orlando Regional Medical Center are under way, while Florida A&M University’s law school and a new federal courthouse were completed in 2006.

And at the corner, trendy Hue remains one of the hottest dining spots in town, especially during its monthly “Disco Brunches,” when the restaurant’s self-serve Bloody Mary bar draws long lines and the retro sounds of Donna Summer fill the street.

And all that barely covers just one neighborhood in Orlando’s dynamic downtown corridor.

Of course, there are residential options downtown aside from new condominiums.

The charming old neighborhoods ringing the city have been gentrifying since the late 1980s. While Thornton Park is perhaps the highest-profile example, property values are also soaring in the city’s other designated historic districts, including Lake Eola Heights, Lake Lawsona, Lake Cherokee and Lake Copeland.

As builders build and buyers buy, city officials are looking for ways to boost downtown arts and entertainment options while enhancing pedestrian-friendly transportation systems and attracting a greater variety of businesses.

A huge step in that direction was taken in September 2006, when city and county leader announced a deal that would bring downtown a new arena for the NBA’s Orlando Magic, a state-of-the-art performing arts center and a facelift for the Citrus Bowl, the city’s 70-year-old football stadium. The three buildings with a combined price tag of more than $1 billion would be financed by a combination of tax dollars and private donations.