“Kissimmee” was originally a small trading post on the northern bank of Lake Tohopekaliga known as the community of Allendale. After the Civil War, this area was included in a purchase of four million acres of marshland and plains by Hamilton Disston.

The sale price for the land totaled $1 million at 25 cents an acre!

The infusion of $1 million to the state of Florida reportedly rescued the State from financial disaster. In January 1881, Disston contracted to drain the area and deepen the Kissimmee River, so products could be shipped to the Gulf of Mexico and beyond. Many steamboat captains navigated the chain of lakes leading from Kissimmee to the Gulf with cargoes of cypress lumber and sugar cane.

By 1920s the population of Kissimmee increased to more than 2,700 people as a result of the Florida land boom.
Citrus and other crops remained as the predominant industry. The construction of the Kissimmee Airport in the 1940s by the U.S. Army Corps of Engineers for the U.S. involvement in World War II caused Kissimmee’s population to increase to 3,700 citizens.
City leaders continued Kissimmee’s prosperous history growth by attracting retirees to the area during the 1950s. The next period of growth came in the 1970s with the development of Walt Disney World and other tourist attractions. Since Walt Disney World’s debut in 1971, the City’s population doubled from 7,500 to 15,000 in 1980. 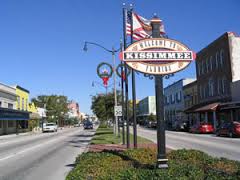 Kissimmee resides in Osceola County, just south of Orlando. Kissimmee defines itself best by the multitude of amusement parks. The city lies along the northwest shore of Lake Tohopekaliga, its verdant Kissimmee Waterfront Park encompasses walking paths, playgrounds, and a fishing pier.

Kissimmee has excellent shopping, restaurants, and amenities. It used to be Miami that had the best shopping, this trend has shifted in past years gradually to Kissimmee for the “best shopping” spots. The weather is sunny and warm for the most part of the year and that will always be a great attraction to tourists. Kissimmee’s Hot spots include:

The Kissimmee Historic District is a U.S. historic district is located in Kissimmee, Florida. The district is bounded by Aultman Street, Monument Avenue, Penfield Street and Randolph Avenue. It contains 189 historic buildings.

Old Town is an amusement park and outdoor shopping mall located in Osceola County. Operating since 1986, its original purpose was to be an entertainment complex and provide unique shopping experiences. Old Town’s iconic Ferris Wheel was renovated in 2017. Take a spin on this Italian hand-built LED ride and enjoy spectacular views of Kissimmee and all of Orlando. Every weekend, enjoy classic cars and trucks throughout Old Town. At night, line the sidewalk to watch these beautiful cars drive down Old Town’s brick-layered Main Street for the “Friday Nite Muscle Car Cruise “and Saturday Nite Classic Car Cruise (the longest running weekly car show and cruise in America).

Many see Kissimmee as the place where they would like to retire. First and foremost Kissimmee has a family friendly atmosphere and has a number of great schools to choose from. Kissimmee has some of the best golf courses, housing, and entertainment in all of Orlando.