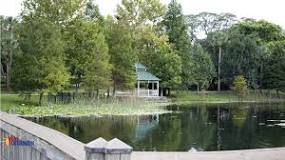 Maitland community can only be described as a thoroughly modern place. Maitland has actually been in existence longer than most Central Florida communities.

In honor of Capt. William S. Maitland, a hero of the Second Seminole War; the city was established in 1838 as Fort Maitland. In 1880, the railroad from Sanford arrived, sparking a tourism boom that lasted until freezes in the 1890s disenchanted visitors.

In 1937 sculptor AndrŽ Smith founded the Mayan themed “Art Center in Maitland“, which was originally intended to be a compound where artists could live and work. The art center is now listed on the National Register of Historic Place. It features an open-air chapel that has become a popular location for weddings.

Since the 1960s, Maitland has been a quintessential bedroom community. Ideally, the area’s first suburbs were built there to attract young families looking for large lawns and good schools.

In the late 1970s, a sprawling office park called “Maitland Center” was built near the I-4 interchange, giving the city a distinctive business identity as well. The 190-acre development contains a hotel, 45 office buildings, and 400 businesses.

The Florida Audubon Society was founded in the Maitland community, and its headquarters, including the bird hospital, remain on Lake Sybellia.

Underway is Uptown Maitland East, a retail and condominium project, and North Bridge, a commercial office project that will sit across from Ravinia.

Meanwhile, Maitland Town Square has been given new life as well. The Brossier Company has stepped in to negotiate with the city on taking over the project. It would include a city hall and a public safety complex in addition to condominiums and retail space. Tentative plans call for more than 200,000 square feet of office space, 250,000 square feet of retail space, 600 residential units, a 150-room hotel, a movie theater, and parks.

On the south side of downtown, “The Morgan Group” has built “The Village at Lake Lily“, a nine-acre, mixed-use project encompassing condominiums, apartments and 45,000 square feet of retail space.