In 1846, the surveyors named Lake Dora for  Ms. Dora Ann Drawdy (1819-1885), who homesteaded in the mid-1800s and befriended federal surveyors with her warm hospitality. , and years later, in 1883, the small but growing town was named for the lake.
Three years later, the town’s name was officially changed to Mount Dora to reflect the fact that the settlement rests upon a plateau 184 feet above sea level – an unusual feature in Florida.
A popular winter retreat for hunters, fishermen, and boaters, The Alexander House opened in 1883 – a two-story hotel with 10 rooms. The Alexander House was renamed The Lake House in 1893, and in 1903, The Lake House has been renamed Lakeside Inn and remains in operation today. Visitors included Presidents Coolidge and Eisenhower, Thomas Edison, and Henry Ford.

The early 1920s marked a significant boom in residential growth and business development, and Mount Dora began the transformation from a country town into a city. 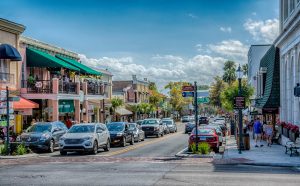 Today, Mount Dora is a still-growing city with a flair for the arts, and the city remains a popular tourist destination.
‘Someplace Special’ to Play, Shop, Dine, Stay… The City of Mount Dora truly is ‘Someplace Special,’ a charming, one-hundred plus-year-old historic village in the heart of Central Florida on the shores of beautiful Lake Dora in the Harris Chain of Lakes.
Join us for one of our nationally known annual festivals, go fishing in the “Bass Capital of the World,” or simply relax and escape the hustle and bustle of everyday life. Bring the entire family and enjoy an old-fashioned, small town celebration.Mount Dora is located on the shores of Lake Dora, part of the world-renowned Harris Chain of Lakes boasting some of the world’s best Bass fishing and other outdoor activities.

Mount Dora is well-known for its charming tree-lined streets, antique shopping, and for its historic inns, cottages and bed-and-breakfast facilities. Mount Dora is only a few minutes drive to the Central Florida and Orlando area attractions and theme parks.

To really experience the charm and history of Mount Dora, we recommend that you consider staying at one of the Downtown Inns, B&Bs, or Cottages all within easy walking distance to the historic downtown shopping and entertainment areas. You’ll be glad you did!